Waguespack wants a tougher rule to rein in Aldermanicus rex

I had hoped to begin this column with reform Ald. Scott Waguespack explaining Chicago’s arcane Rule 14 and how it applies to political corruption and powerful Ald. Edward Burke, who has made a fortune while in public service.

“The people of Chicago need to know what’s going on,” Waguespack said as we sat down for an interview for “The Chicago Way,” my podcast on WGN radio. “Chicago has lost hundreds of millions of dollars to pay-to-play politics. Rule 14 can address this, if it is strengthened and changed.”

Agreed. Rule 14 must be strengthened. If it is not strengthened, then some politicians will continue treating taxpayers as livestock, to be processed right down past the squeal.

But I wonder if the people of Chicago truly care.

There is no video involving Rule 14, no squabbling about Rule 14. And I bet that some of you are wondering if you should even give two figs about Rule 14.

So, let’s start by diving into Chicago political history for something earthier. Something with meat on it. Something with sharp teeth. If you dig around in some dusty museum unknown to me, you might find evidence of a fantastical creature that will demonstrate the importance of a new Rule 14:

For ages and ages, Aldermanicus rex was a short, slouchy being with two sets of arms: A pair of ridiculously short arms when it was time to pick up the check, and another pair of long, sinewy arms for snatching fat envelopes and no-bid paving contracts for friends.

It wasn’t cuddly. Some were positively vicious, and if you owned property or tried opening a business and somehow inadvertently threatened or angered it, the creature’s fangs might come out.

What distinguished them was their opposable thumbs, which allowed them to count. A successful species offshoot — known as Aldermanicus mistah chairmahnus — had double-jointed knees and used these knees to demonstrate abject submission when dangerous alphas like Mare Daylee and Mare Raam were on the prowl.

A few Aldermanicus chairmanus rex specimens were even found to possess reptilian brains that could respond to simple suggestions, such as “One for me, one for you” and “Mr. Chairman, is there anything else you require?” or, “I’m thinking about developing a giant property at Lincoln Yards, but I need a property tax reduction lawyer. Can we be friends?”

When? Oh, it began a few weeks ago in January, when Ald. Danny Solis, 25th, then chairman of the City Council’s Zoning Committee, was found to be wearing a wire for the FBI at City Hall.

Some aldermen, not Waguespack but others, are in panic, wondering who else might be wired up. Voters are peeved. Mayoral candidates Lori Lightfoot and Toni Preckwinkle will hammer at each other over the corruption issue and Preckwinkle’s ties to Burke.

And 14 aldermanic races have been pushed to the April 2 runoff. The City Council is entering a period of volatility. Waguespack thinks now is the time to strike on Rule 14.

“If there are enough new people elected to the City Council, we’ll see a disruption in the old way of doing business,” the alderman said. 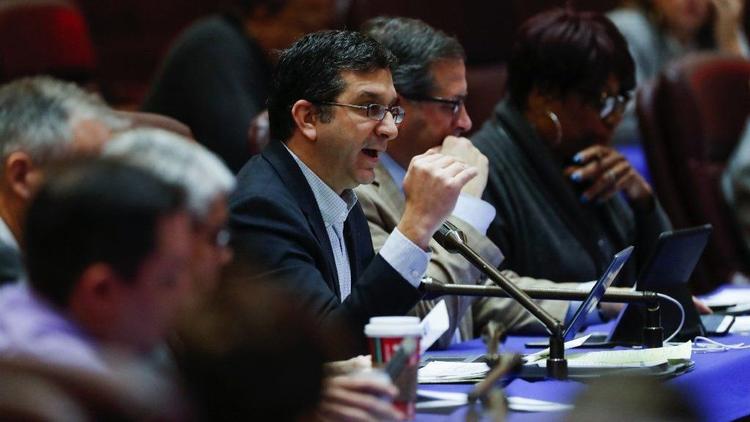 Rule 14 allows Chicago aldermen present at council votes to recuse themselves from the vote if they have a financial conflict of interest in the matter. Burke is the king of Rule 14, having recused himself hundreds and hundreds of times over the years.

Burke, 14th, the former longtime chairman of the City Council’s Finance Committee, is under a federal City Hall corruption investigation. He reportedly was caught on the Solis wire. He’s also a millionaire from his side legal practice, which specializes in appealing property taxes.

Waguespack wants Rule 14 changed so that an alderman who has a conflict on an issue — say they’re making money from a client who will benefit from a proposed law — must declare that conflict publicly before any debate begins. Currently, the conflict doesn’t have to be acknowledged until just before the vote.

Lame duck Mayor Rahm Emanuel has talked about offering a change to Rule 14, and there is a mayoral draft resolution floating around City Hall. But it comes too late. Emanuel should have pushed this change eight years ago, but he needed and wanted Burke’s help then.

The council is considering a resolution to name Waguespack — who also wants TV cameras recording committee hearings, so there is a visual record of what the aldermen are up to — as the chairman of the Finance Committee.

Emanuel’s choice — Ald. Patrick “My wife’s in real estate” O’Connor, 40th — is now in Burke’s old post. But if Waguespack were to be made chairman of finance, the shock waves would ripple through the insiders at City Hall.

He’s nobody, nobody sent. But Chicago needs someone new in that job, someone who isn’t in this to make a fortune, someone who thinks about transparency.